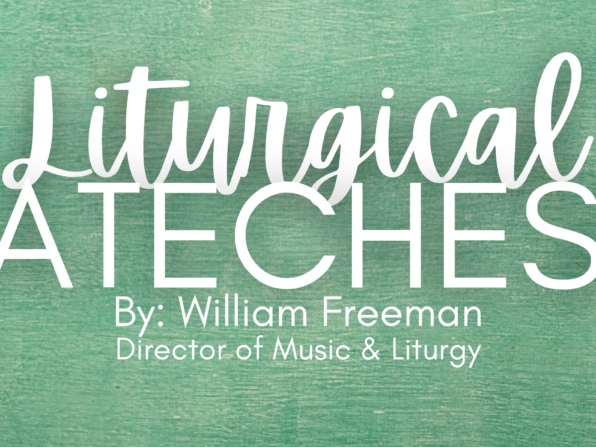 Over the past few weeks, we have explored Pope Francis’ recent motu proprio and how it has directly impacted us at St. Anthony of Padua. While the main audience for His Holiness’ recent motu proprio were bishops and parishioners in Extraordinary Mass communities, the last paragraph specifically pertained to us as a parish. Now that we have established how the motu proprio directly guides what we have been doing, let’s tackle an even broader topic. If you’re coming into this series just now, you might want to consider visiting our website to read the earlier entries in the bulletin archive.

So how is the music at Mass selected?

Selecting music for Mass is a multi-step process. The texts of the Antiphons are something that we as musicians have zero control over. Just as we can’t arbitrarily change the Gospel Reading or even the Responsorial Psalm to better suit our emotional needs, we have to follow the antiphonal texts as prescribed in the Roman Missal or the Graduale. (Since we’re a Novus Ordo faith community, we tend to stick with the Missal.) While we can choose the actual music (that is the melody and rhythm) that accompany these texts, the selection is pretty slim. There are composers preparing to publish new settings as we speak, but for now, our options are limited. Scarcity and a set template make this part pretty easy.

The other easy part of the process is selecting the Ordinary of the Mass. These are the parts of the Mass that we sing on an almost weekly and daily basis such as the Gloria, Sanctus, Memorial Acclamation, Amen, and Lamb of God. Once we pick a setting of the Mass, we commit to it for multiple months. For example, we are just starting Mass of Spirit and Grace. Prior to this, we had been using Mass of Joy and Peace for about four and a half months.

That was the easy part. Selecting the hymns and songs proves to be a bit more tedious. At St. Anthony of Padua, we take care to not just pick music based on the personal preferences of the musicians or our priests. The process of selecting music for Mass involves discernment, prayer, and studying the readings. That’s just on the “church” side of things. We also have to take into consideration the musical ability of the congregation. Each music publisher releases a guide to help with music selection. Obviously, the publishers tend to only recommend their own stuff. While this was the way we had been doing things, we moved away from this approach in 2018 when we purchased our first set of hardcover hymnals.

The first step we complete is opening the Roman Missal to look at the antiphonal texts. Many times, especially at Communion, there are pretty close relationships to more general music. A common Communion antiphon is Psalm 34, or the basis for “taste and see” texts. From there, we read the Scripture readings of the day from the Lectionary. What is the general message that is being conveyed? Oftentimes we need to consult with resources that provide interpretation and background on the readings. This is especially true since we’re trained musicians, not theologians.

From there, we look at the Scriptural Index in the back of the hymnal. This index breaks down where in the Bible each specific song applies. Obviously, this doesn’t always work. The Lectionary contains many readings that simply do not have hymns or songs already written. This is especially true during Ordinary Time. Other times, there might be an erroneous listing or something written by a composer that we no longer have permission or the legal rights to use.

Over the past two or three years, we have made an extra concerted effort to avoid heretical or schismatic texts. Just because they made it past an editorial board of musicians does not mean that the hymnal is free from error. In other cases, there might be one heretical verse, but the rest of the hymn is fine. Do we throw out the entire hymn? Can we skip the questionable verse? In other cases, as is the case with The First Noel, the hymn is theologically sound but contains verses for multiple celebrations in one hymn. Do we sing the Epiphany verse in The First Noel on Christmas Eve or do we simply skip over it? Again, these are often difficult decisions to make that go beyond simply programming favorites.

Once we make these assessments, we consider the musical ability of the congregation. Is the music too high? Does it have too many jumps? Is it too syncopated? Is the rhythm too hard? Is this a new text to an already familiar tune? (Think of how many different texts we have that use the same melody.) Another question that doesn’t really apply to us during COVID-tide is how does the music look in the hymnal? If, as a professional musician that has conducted Beethoven symphonies and Sondheim musicals before, I have to stop and think about the rhythm or music because it simply looks too hard, I tend to shy away from it. In my mind, I’m thinking about the parishioner in the pew that doesn’t have a musical background, might be in church for the first time in decades (likely some event is calling them back), and would immediately give up.

In our secular world, music is often used to create moods. This has become especially true in the era of motion picture and movie soundtracks. To a certain extent, the same can be said for music at Mass. One very common misconception is that music at Mass is supposed to make us feel better. This is true, but not necessarily in the manner that we think of. The music at Mass is meant to catechize and evangelize us while bringing praise and worship to our God. It’s supposed to make us be better by bringing us closer to our Creator. This is the prayer that we sing. While sure, some tunes will likely elicit memories, both good and bad, or our own life experiences, we have to remember why we gather at Mass and who we are serving. If we’re at Mass because we know that we need the spiritual nourishment offered in the Eucharist and want to give God thanks and praise, we should be coming away “feeling better” simply from partaking in the Sacrament.

In conclusion, one of the best compliments and messages of thanks that we can receive as church musicians is how well we were able to marry the Scriptural readings with the songs that we sing at Mass. Some weeks the connections are blatantly obvious. Other weeks, they’re a bit more woven into the fabric of the liturgy. While selecting the music for Mass is not an easy process, it is highly rewarding. Not only does the music seek to reinforce Sacred Scripture for us here today, it also serves as a very personal form of prayer and thanksgiving to the God who has given us so, so much.